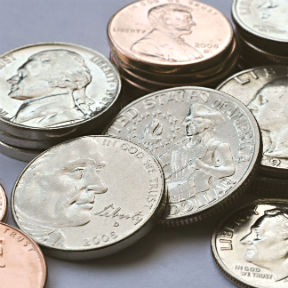 As both mainstream media news, not-so-mainstream media news, and even our current administration tout the “strength” of our present economy, we must remember that they are measuring in units that are and have been a moving target of value.  Even President Trump, who called out the misleading statistics published by the US Government as “Candidate Trump”, has lately been drinking the government Kool-aid as well.  Granted, as long as you are measuring by the same means, his numbers are better than the last administration, but I don’t think he should be beating the “strong economy” drum quite so loudly.  The problems that caused the 2008 crash of the market and banking industry have not been fixed and have only grown larger in the past 10 years.

The markets are up for largely three reasons: we’re measuring in dollars (a moving target) and large corporations have been buying back their own stock shares with money borrowed at near zero interest rates.  Companies buying back their own shares to keep more of their own profits bid up the market to a very large degree.  Add to that the election of a businessman to the office of President who influenced Congress to roll back both regulation and taxes (though not nearly enough) and the country and business sector was prematurely encouraged.  This last dose of encouragement from the business sector has had a much larger optical effect than real financial effect, which is dangerously misleading when we consider it is built atop the same troubled 2008 foundation.

The US Dollar has been backed by nothing since 1971 when President Nixon suspended the convertibility of the US Dollar into gold.  As the Federal Reserve prints more and more dollars, each dollar in circulation can be traded for less substantive value.  Therefore, if we count in dollars, we might as easily count in “units” or “credits”.  Each of those terms, including the dollar, are equally meaningless today despite our cultural attachment to a dollar being a representation of value through the mechanism of price.

So to count the sales of gasoline in dollars rather than gallons is simply meaningless if you grasp the above understanding.  The same goes to housing, oil, and copper sales if measured in sales dollars rather than housing square footage, barrels of oil, or pounds of copper.  Demand for goods (and therefore a growing economy) is reflective in the quantity of goods needed, not in their overall sales price for the year.  If news media DO understand this concept and STILL publish “news” such as this using the dollar as the basis, then the publisher is being manipulative or divisive, or at the very least inaccurate or naive.  I fear they are drinking their own Kool-aid.

With this understanding, if your accounts are not currently earning at least 11% annual return on the growth of your retirement, family, or personal wealth, your purchasing power is eroding! While government estimates inflation at 2.9% currently(1), other sources(2) which calculate on more reliable formula, like comparing the cost of the same basket of goods between two dates, rate inflation currently near 11%.  It isn’t a stretch to consider that the same government publishing the numbers can influence how those numbers are calculated.  It’s called hedonics or more accurately “hedonic pricing”(3).  Basically, if an 8-oz sirloin steak was priced in 1970 as a source of protein in our basket, we can substitute 8-oz of hamburger or chicken breast since each is a source of dietary protein.  If we’re measuring economic inflation, the measure must be apples to apples or it isn’t a reliable measurement.  The resulting numbers might “feel better”, but the measurement isn’t real.

Consider also that the stock market on which many people’s retirement and wealth depend still has the same systemic risks(4) and problems as it did in 2007 prior to the 2008 housing bubble bursting and the problems have both continued and have grown in magnitude.  If the current bubbles (plural) which extend to the housing, bond, and consumer credit sector once again burst in the expected cascading market crash, what is your plan to insulate yourself from a conservative estimated loss of 40-70%?  Will you participate in that crash directly, or will you be insulated from the market because you understand the strategies available to protect your retirement and family wealth?

David Pandone Wealth Strategies focus on the portion of your wealth I consider “safe money”.  A place to grow your wealth with predictable returns that cannot be taken from you by a crashing market or by undue amounts of taxation.  The tax-split there is between non-qualified programs and qualified retirement programs (401k, 403b, IRAs, etc…) where qualified money is necessarily taxed as “earned income” in retirement as you withdraw it to support yourself sometime after age 59-1/2.  There are similar strategies that can protect both your IRA or 401k savings (taxable) and your non-qualified family or personal wealth that can be grown to double digit rates, with high liquidity, no penalties to pre-retirement access, and can have both capital and gains accessed without either earned income or capital gains taxes.

If you or your family hasn’t sat with me to learn what strategies are available, I suggest you contact me through my website resources like email, phone service, or the many “get started” buttons and we’ll get that conversation started.*  If you are a current client, I’ll ask “With which of your friends or family you will share this link?”  If after the next crash you will be able to say “My safe money didn’t participate in that…”, I hope you won’t need to explain to those you care about that such a strategy was available but why they didn’t hear about it from you.

Click the graphic and give me an idea of your circumstances, or contact me through one of the options on my website contacts page.  To view contact information you will need to have a free website membership, which only takes a minute.  In addition, you’ll have free access to the six-part newsletter that will help you understand the current economic environment.

You can read more about the underlying systemic issues at play in the recent Egon Von Greyerz article on King World News:

ALERT: Greyerz – The Global Reset Will Come Like A Thief In The Night