The Magic of Compound Interest:

When you invest your money and earn, for the sake of simplicity, 10% annually on a thousand dollars of capital ($1000), you would have $100 in profit or yield (which is taxed as earned income by governments in most states, but let’s ignore that for now).  When you’re ready I can show you accounts that have average earnings rates nearing 10% even in our present bleak economy, and avoid both taxation and market risk! 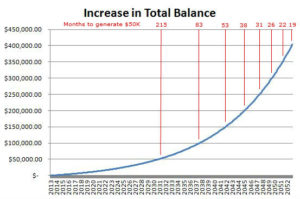 At the end of your first full year, you would have $1100 in your account ($1000 capital plus $100 at 10% interest) assuming your reinvested the earned interest or profits.  Had you removed your $100 and enjoyed your profit, the second year your investment might, with similar performance, yield another $100, the same as the first year.  Compound Interest assumes you do reinvest the proceeds.  Again, for simplicity in this example, interest is compounded or paid annually.

Our ‘Total Balance’ chart above is calculated from $100 contribution each month at a 10% rate of interest with starting capital of zero.  As more interest is reinvested to the underlying capital, increasing levels of interest are paid out and the process snowballs and is in effect ‘exponential’; or building upon itself.  A chart of such activity will show a pattern referred to as a ‘hockey stick’: a relatively straight line with a sudden upward turn over a very short period of time near the end.  Many people lose interest and tire of saving before they get to the exponential portion of the compound interest phenomena and therefore miss out ‘just as it’s getting good’.  If you want to get to and take advantage of that ‘sweet spot’, you have to get started sooner rather than later.

In just 45 months (less than 4 years), your investment at 10% has returned enough profit to you ($978.06 as figured above) to recover your original $1000 capital.  At this point you could remove your capital, have the money you originally worked for back in your possession, and continue to allow the investment to work earning its own interest on money that you earned for engineering an investment.  Or, if the investment is sound and has limited volatility (potential for both loss and gain) you could leave your original capital here and let it keep working.  If you’ve left your $1000 capital here for 45 months without enduring financial hardship, why not leave it here and allow it to continue to work for you?

How much time did you invest in this venture?  A few hours, if that long, finding and evaluating a good investment vehicle.  How much money did it return to you?  It earned over nine-hundred and forty-eight dollars by year seven.  How long does such an investment continue?  For as long as the investment or company is viable and continues to operate under the terms of your investment or ‘bond’. 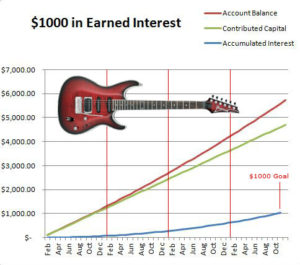 A secure investment could pay out for decades or centuries.  Some families have held stock in companies and other assets in trust that have paid out interest and dividends for generations.  Think long-term: How could your investments perform when you pass them in trust to your children?  When they pass them to their children?  You could be starting a legacy for your family.  What is that worth to you?  Be certain you also plan to pass your financial education to your children.  Inheritances have an odd way of disappearing in short order when those that benefit from them don’t understand how they were created or how to protect them!

This process has also cost you something termed opportunity cost.  Opportunity cost is what you could have bought with your $1000 of capital, or $100 per month in contributions while you were working to save it and while you set it aside and assigned it to ‘go to work’ earning you interest or profit.  For any of this to do you any good, you’ll have to employ delayed gratification.  In our get-it-now-pay-for-it-later society, this might prove to be a challenge.  Don’t allow that enchanting idea to defeat you.

Let’s take a real-world example and use more realistic factors this time by including capital gains tax at the current US rate of fifteen percent (15%).  Consider that if I had spent my $1000 in savings on a new guitar that I liked, I would have something of value paid in full.  What additional money comes in from the $1000 I spent on the guitar?  None; if I don’t use it in a paid performance or giving guitar lessons (trading time for value).

Starting in January, continuing to save $100 a month and allowing the investment to grow, the investment can pay for the guitar as soon as November of the third year (35 months) when accumulated interest equals $1004.38.  That’s money that your money earned, not money for which you traded your valuable time, and in spite of the 15% capital gains tax.  It would only cost me time to wait for the investment to perform.  What’s really significant is that in April of the sixth year (month 63) the same investment could buy me two guitars; the second being earned 8 months sooner than the first.  That is the power of compound interest, allowing your earned interest to earn more interest.

By June of the seventh year (month 77) the investment has cleared three-thousand dollars in earned interest and I could buy three guitars.  By allowing both our capital and earned interest to compound, we have accumulated the same value in 14 months that originally took 35 months.  By the time we get to year 10 in this scenario, the investment has made over $10,000 in interest and I could buy 10 new guitars.  What you have to decide is whether it is worth $100 a month in capital, the opportunity cost, to generate an investment that performs like this. 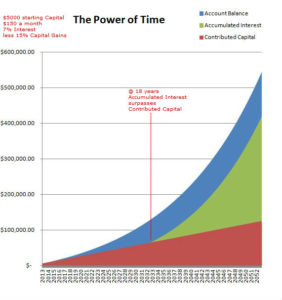 The use of compound interest to generate cash flow is the main idea behind retirement plans.  Ideally, people planning to retire should generate enough capital that the capital can yield enough cash flow when they are ready to retire that they don’t have to draw down their capital for living expenses.  Ideally…  Capital is the engine that generates your interest.  If you chip away at that capital, spending it to survive, your interest decreases.  How long will it last?  It is very possible for the average person making average wages to save enough to sustain them in retirement, though you have to plan far in advance and start early so that the factor of time, the most powerful of the TVM factors, has the greatest opportunity to work for you.  The longer you wait to get started, the harder it will be to grow capital because you’ll have less time to earn interest.  You must also employ the type of vehicles that protect you from market loss and tax liabilities!

If you’re looking at the included charts lamenting over the fact that it takes 25 and 30 years to accomplish such performance as $1500 a month in cash flow, remember you’re spending very little time at that point to produce it.  The time-value-of-money-factors that we discussed earlier in this article are the dials on your investment (positive interest) and credit (negative interest) machines that control the performance of the machine.  The more capital you start with, the greater your monthly contribution, the better the investment performs and the sooner you tend to hit that upward slope in the chart.  Of the three factors however, time will still do the most impressive work for you.  Establishing a habit of saving, however small, is very important; if only to create the habit for yourself.  That is the very least that everyone should do.  The most important idea is that you get started.

Consider also, that as building base of capital and compound interest can work for you, in use of credit, these same forces can work against you.  As long as you have a balance (the bank’s capital) on a credit account, the financial institution that services that account calculates periodic interest and adds it to your outstanding balance every month.  If you aren’t paying down the principle you borrowed, that exponential curve gets steeper and steeper.  You must manage your expenses so that they don’t waste the wealth that you could create. 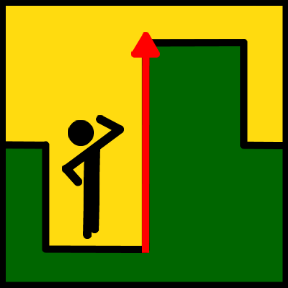 You may be in a situation where all or nearly all of your earned income gets spent each month running your home or paying bills.  A budget is the tool that can help you find money in your cash flow that you could put to work.  The more money you locate, the more capital you can control; the sooner you can generate impressive returns.  You may need to look at paying down debts before you can work as hard as you’d like to on your saving and investments.  If those preliminary steps are necessary to get you moving toward your goal, that’s ok.  You wouldn’t be the first person starting with nothing or starting in debt.  What’s really important is that you figure out where you are financially and then decide where you are going.  A written budget makes that easy!  Avoiding a written budget only wastes time and time is the most effective factor.  It really is that important, and it’s easier than you may think!

My MoneySmart Personal Finance Solutions book, in its second edition, makes budgeting and other financial planning efforts easy.  It’s already organized, all you have to do is fill in the blanks and add!  You can be MoneySmart!

Compare the performance of an investment that makes you money with the use of credit to buy the same item which costs you money and you might be ready to start thinking about money a bit differently.  People who understand money do think about and plan their finances differently.  What you have to decide is what you want to accomplish (financial goal – capital required), how long you are willing to pay the opportunity cost (term), and what investment vehicles can help take you there (rate vs. risk).  The TVM factors are going to be working for somebody; will it be your bank or you?

My warmest regards and hopes for your continued success!

Any and all information and discussion presented on this site is provided for generalized information to our current client base for review and discussion of key concepts. Our clients have access to a representative licensed agent to assist them with their decision-making process. Nothing on this home page, or an any linked pages, images, or videos should ever be considered ‘advice’. We expect you to seek the input and assistance of a qualified licensed representative or agent before making any important financial decision. Any use or interpretation of the information presented, linked to, or posted by site visitors in your decisions will be enacted ‘at your own risk’.
All Content (C) 2019 David Pandone, All Rights Reserved